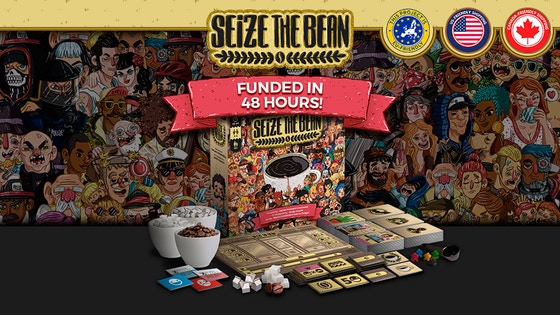 Seize the Bean - A Light-Hearted Deck Builder about Berlin!

Latest Updates from Our Project:

Whew, we are almost down to the final week and things are continuing to go well. We’ve heard your comments asking for more updates so we’ll try to pick up the pace a bit again. We’ve been silent over the last few days because we’ve really had our hands full working on some very cool surprises to come. We’re still working on shipping updates and while we have many late-campaign stretch goals worked out you can see that we’ve not yet revealed the one at €75k (or beyond). Stay tuned for more info there...

Meanwhile, let’s finish up introducing the unlocked customers, shall we?

Meet the Coffee Connoisseurs. These are the folks that judge your every move, examine every bean, and complain about the quality or price unless they’re making the brew themselves! In fact, it’s safe to say that players play the role of these very characters… regardless, they are wizards of the barista profession and for this reason their abilities will allow you to exchange resources whenever you’re caught in a bad situation!

Probably the one customer we can all relate to the most is the Espresso Junkie. Three cups of coffee a day is normal (and maybe below their average intake) for this highly-caffeinated character. You can find them using any excuse to get back to the café: for meetings, for lunch, for just about anything. And don’t be fooled by the name: they’ll drink coffee in nearly any form, espresso, latte or cold-brew too!

The Coffee Snob is actually more into judging coffee than drinking it. Filled with roasting trivia and regional knowledge, the Snob can easily identify any blend by taste and smell alone and then deliver a plethora of criticism about the way it was roasted or brewed. You can’t please these people so don’t even try!

All of the Competitive Baristas of Berlin are the cream of the crop when it comes to both customers and connoisseurs. They have good taste, drink in moderation, and are oh-so-classy when both ordering and serving beverages. From local hobbyists to international legends, one can never underestimate the power of the Barista!

Seize the Bean would just not be complete with a group to represent all the wonderful board game fanatics out there in the world. As many have noted, there is no “Kickstarter backer” customer group (and this is because we like to think our backers fit diversely across all the groups in the game) but it’s safe to say that many of you can likely relate to this group quite a bit. We debated a lot about the ability of this group, at one point considering to allow them to steal other customers but we wanted them to remain non-aggressive in their nature. For this reason, we’ve set their abilities to allow you to increase the rewards of other customers in your line, because we all know that board game geeks are just great to have around!

Front and center at every tabletop event we’ve ever been to (and also often found on the U- and S-Bahn trains of Berlin) are the beautiful, creative and dedicated Cosplayers. DIY costumes, fictional accents and elaborate backstories are just a few of the immersive experiences that these real-life, role-playing individuals bring to any location they frequent. Seriously, who can complain about a viking sipping a latte in your café?

Admit it. This is you. Or someone you know. From the so-called Cult of the New to those that have just been in the hobby for years, the all-too-common full-wall “shelfie” has become a staple of the board game industry. And thus, the Collector cannot be ignored. But can they ever play all the games they own? That’s the real question…

You can’t have board games without the friendly and hardworking publishers out there, and we’re happy to present one of our favorites, Smoox Chen from Taiwan Boardgame Design! A friend of ours since we first ventured into the industry, we love the spirit of his team and find that he’s a great example of an awesome and energetic publisher!

That’s it for the customers today. And actually, the only bonus customers we haven’t intro'd yet are the two promo packs (Boardgame Media and Quality Beasts) which aren’t unlocked so we’ll leave them out for now. However, we also haven’t introduced the initial 10 core box groups yet, so you can expect to learn more about those in the coming updates.

Meanwhile, we heard that some of you maybe wanted a solo mode? ;)

That’s right! We heard you, we priced it out, we pulled together our early design notes, we pushed hard to thoroughly play-test it, we further developed and now we are proud to say we have not only unlocked a solo mode but created one that we have a lot of confidence in!

We’ll certainly be updating the rulebook with more details but let’s step through a bit of how solo mode works. In the basic version, players will need to get used to building up their own engine while racing against the competition, which we have codenamed Starbots for now (it’s a mega-conglomerate, gentrification-causing, robotically-controlled café franchise chain, so obviously it needs to be put down).

We don’t have a sample art image of it yet, but a fifth, modified player board will be added for the Starbots competitor. They will have 6 actions: take a customer, take a product, take an upgrade, gain 1 hype, earn a good review, or earn a bad review. A deck of 20 cards are used to determine which action the Starbots staff takes. Each time the first action of a game day is taken, the Starbots café gets a combo token added to that action. This enhances the action for the next time it’s taken!

In order to lower player admin, you won’t need to process a line of customers nor manage resources for the robo-competitor. Instead, during each Serve step the Starbots opponent simply gets good reviews equal to their hype. And the only way to mitigate the opponent’s progress is to trigger certain icons in your Product and Upgrade cards which allow you to either lower their hype or flip over their combo tokens. Flip an already flipped token and it’ll vanish, but allow the opponent to trigger a flipped token and it’ll be flipped back face up!

You should by now be able to gather that the opposition in solo mode is just a mean, bean-eating, good-review-earning machine. You’ll have to push pretty hard to keep ‘em down and pull off your own engine combo. And all this without the scenarios in the solo mode book providing you with specific setups and additional goals to meet in order to win.

How can you check out solo mode? We’ll be adding it to the print and play once we have a semi-passable, functional player board art-wise. This may not be during the campaign, but stay tuned for updates about it, we know you are eager to try. And those that are interested to play-test digitally, don’t forget you can always sign-up for our playtesters’ guild to join in on Tabletop Simulator once we launch.

That’s it for today. Let’s rock these last 9 days!